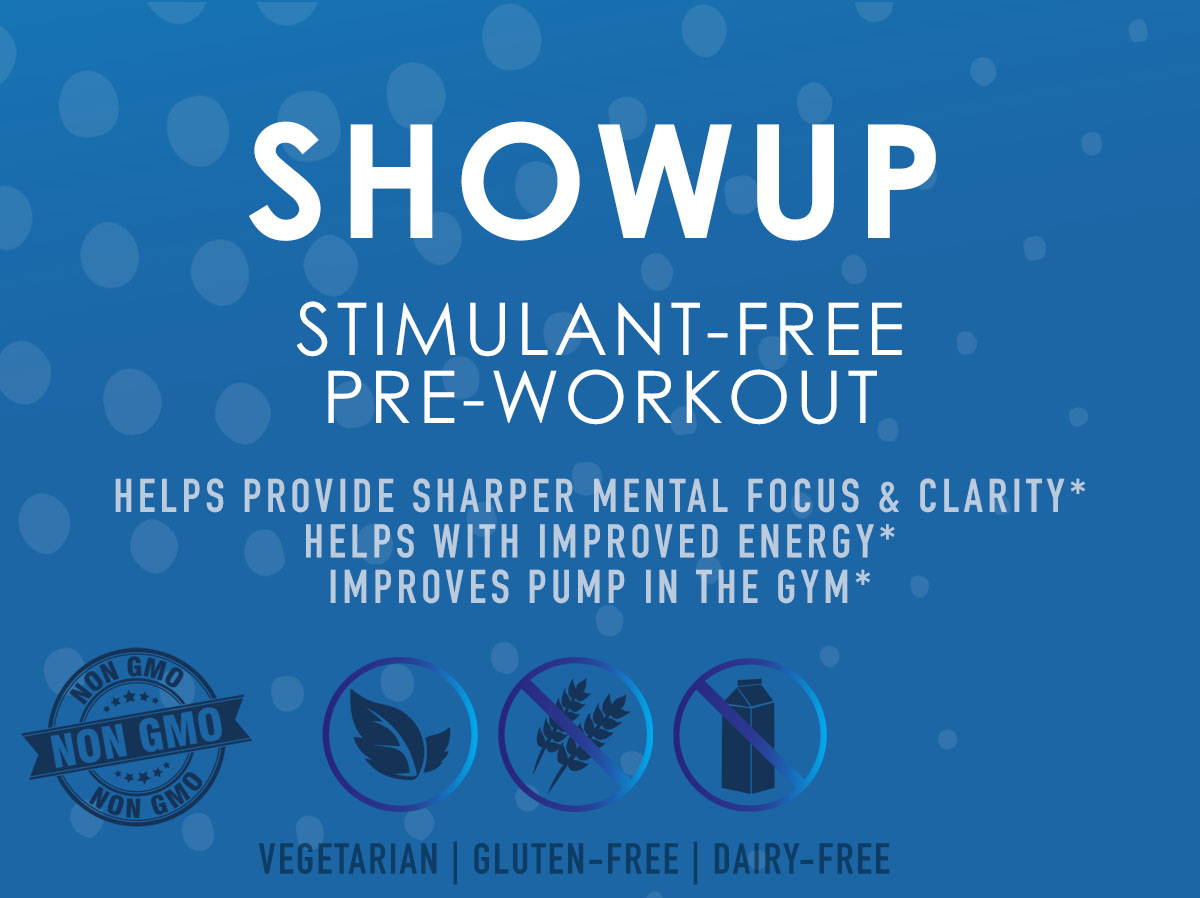 ShowUp is a next-level pre-workout product that does not contain stimulants.

This advanced formula helps provide sharper mental focus, clarity, and improved energy while also improving your pump in the gym.†

No more harsh stimulants that hurt your stomach and make you dependent on harmful high dose substances that may lead to anxiety, diarrhea, headaches, high blood pressure, and anger.

Research shows that spiking cortisol during a workout can lead to muscle wasting and poor endurance. You deserve better than the same old megadose caffeine bs stack.

Nothing more unoriginal than sticking caffeine in a junk powder and calling it "performance." What a joke! Do you want better absorption, cleaner ingredients, high GI tolerability, better focus, and improved performance? Well, look no further!

Caffeine is a drug and too much of it burns out your adrenals and creates sleeplessness. So, say no to drugs, no to traditional pre-workouts, and instead ShowUp for your workouts!

By utilizing keto salts, alpha gpc, and glycerol you don’t have to sacrifice a good night’s sleep for gains in the gym.

Time to blend the power of performance nutrition and nootropics to bring you the best blend in pre-workout performance with focus and memory science.

Alpha-GPC is used for Alzheimer disease, stroke, dementia caused by reduced blood flow to the brain (vascular dementia), memory and thinking skills, and other conditions, but there is no good scientific evidence to support these uses.

● Acetylcholine (Ach) is a neurotransmitter that functions in both the central and peripheral nervous systems. It is a non-monoamine subtype, (which is common to the neurotransmitters of the noradrenergic, serotonergic, and dopaminergic systems). Instead, it is made up of two chemical groups: choline and acetyl coenzyme A (AcCoA).

It is this ability to hyperhydrate cells that is also attractive to bodybuilders for slightly different reasons. Muscle pumps occur when fluid builds up in muscle cells, making them stretch to accommodate this increased volume, therefore making them appear larger and fuller.

Glycerol is hygroscopic, meaning it attracts and holds water molecules in the surrounding environment. Having extra glycerol inside you muscle cells and blood vessels will help to massively boost muscle pumps during training. One study found that glycerol increases the body’s volume of body fluids by 300 to 730ml. However, as stated above the average bodybuilder would require a significant quantity of glycerol, upwards of 30g at least, to achieve the desired effect.

Tyrosine, a precursor of catecholamine neurotransmitters, may help alleviate physical/cognitive performance decrements in humans under conditions of high physical/psychological stress.

Ketones are a brain fuel. They cross the blood brain barrier and can be used by brain cells. Not only do many people report they can "feel" ketosis, but also that they gain a boost of mental clarity and focus.

Soviet researchers found Siberian ginseng to be an excellent tonic to enhance athletic performance as well as to strengthen the body during times of stress. ... In most of these functions, ginseng, whether Siberian, Panax, or one of the other varieties, is often termed an “adaptogen.”

In conclusion, we found that the oral administration of ginseng for 6 months has a positive effect on cognitive improvement, particularly on visual memory function in Korean subjects with MCI. Our results provide clinical evidence of Panax ginseng as a cognition-enhancing medicine. 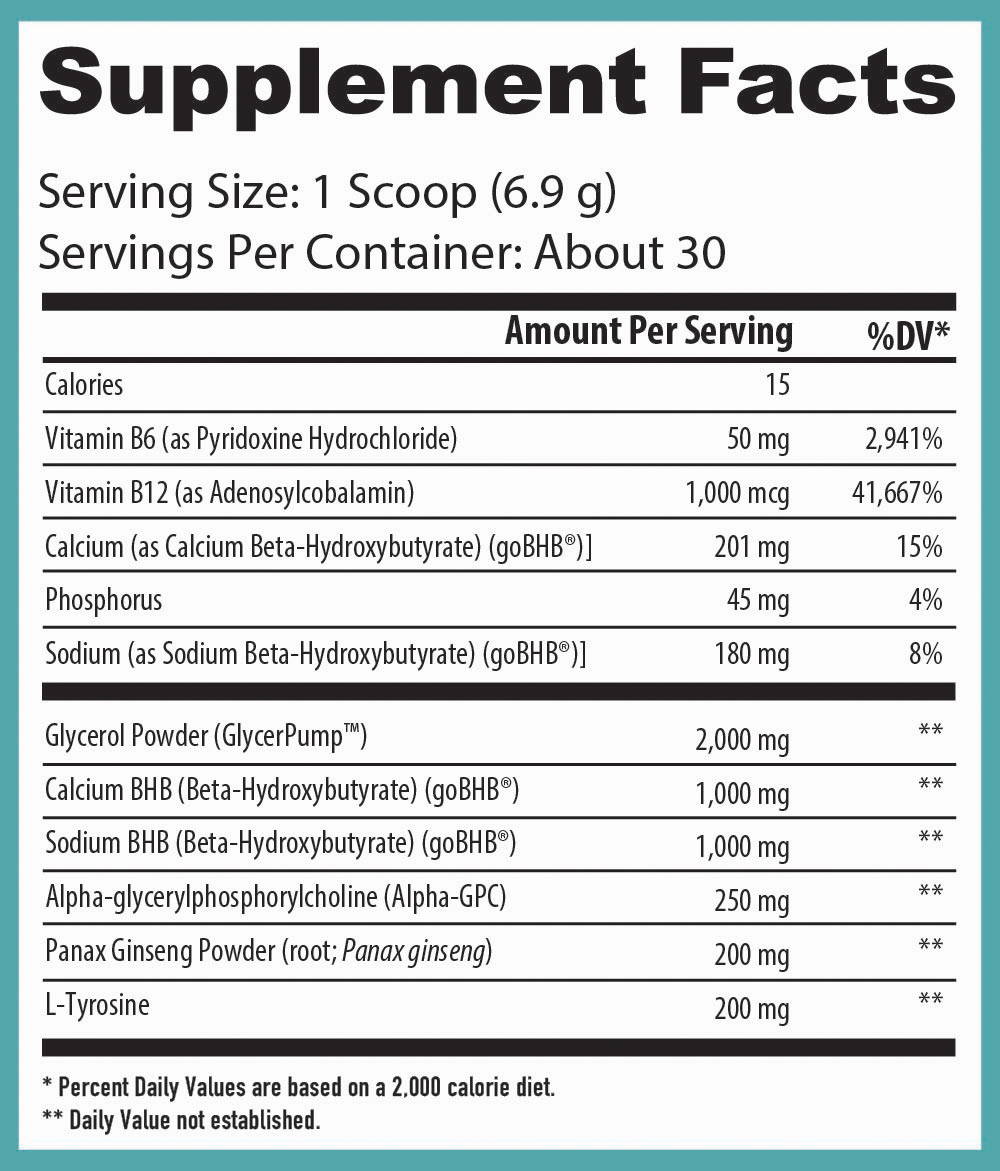 GlycerPump™ is a trademark of Pinnacle Ingredients (Australia). goBHB® is a registered trademark under exclusive global distribution by Compound Solutions, Inc.

DIRECTIONS: Take 1-2 scoops of ShowUp Pre-Workout with 8-16 oz of water or your favorite beverage

STORAGE: Keep closed in a cool, dry place. CAUTION: If you are pregnant, nursing, or taking medication, consult your healthcare practitioner before use. Keep out of reach of children.

Not crazy about the taste. And is clumpy. But it works really well. I have better focus when working out.

The GlycerPump™ material can actually get a little clumpy; unfortunately that's just part of the nature of the ingredient. Shaking the bottle before scooping and using it will loosen it right up. I know personally, I have found that using the scoop to crush the clumps before scooping it out works best for me. There is also a desiccant in the bottle to help with this. Just be sure to keep the lid sealed tightly because the ingredient soaks up moisture. This may sound strange, but the clumping proves that you actually have the raw, 100% ingredient. If you've had other products that claim to have the GlycerPump material in it and the product did NOT do this, it may not have in fact contained it. We are glad to hear it worked for you and you had more focus during your workout!